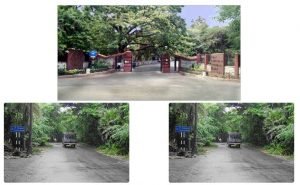 The Indian Institute of Technology (IIT) Madras is one of the top seven technological Universities in India (http://www.iitm.ac.in), established in the year 1956, with technical assistance from the German Government. IIT Madras is a residential institute with nearly 360 faculty, 4000 students and 1250 other staff, is a self-contained campus located in a beautiful wooded land of about 250 hectares. It has been growing from strength to strength ever since it obtained its charter from the Indian Parliament in 1961 and has established itself as a premier centre for teaching, research and industrial consultancy in the country.

IIT Madras has fifteen academic departments and a few advanced research centres in various disciplines of engineering and pure sciences, with nearly 100 laboratories organised in a unique pattern of functioning. A faculty of international repute, a brilliant student community, excellent technical staff and an effective administration have all contributed to the pre eminent status of IIT Madras.

IIT Madras is located in the city of Chennai, previously known as Madras. Chennai is the state capital of Tamilnadu, a southern state in India, well connected by road, rail, air and sea.