The IEEE Madras Section Annual Meet for the year 2015 was held on 31st Jan 2016 at the conference hall at the Alumni Centre, College of Engineering, Anna University. About 120 members attended the Annual Meeting.

Prof. A. Darwin Jose Raju, Treasurer, presented the Management Accounts (un audited accounts) for the 2015. It was approved by the general body.  It was proposed by Dr. Sivakumar and seconded by Dr.G. Udhayakumar. After few queries which were clarified. It was also informed that the audited accounts will be approved after March 31st 2016, during the Annual General Body Meeting.

Awards given to Student Branches:

Out of the 42 SBs submitted their activity reports, after evaluation, 31 SBs were presented with cash awards and certificates.

Awards given to Large Student Branches:The following three large SBs were given cash awards and certificates.

Awards given to Section Society Chapters:

Out of 24 Society Chapters & 4 Affinity Groups, except six the rest of them received cash awards and certificates for being active during the year 2015 by organizing various events.

Mr. C. R. Sasi, Chair, Chairman, Nomination Committee presented the report  on the Execom slate of the Madras Section for the year 2016 and inducted the new Execom members with Dr. M. A. Atmanand as Chairman. Based on the recommendations of the NC, the General Body approved the co-option of  Dr.R.Dhanasekaran as an execom member. 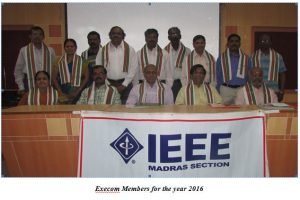 The outgoing and the incoming Execom members & nomination committee members were honoured,
The incoming Chair, Dr. M. A. Atmanand, in his brief address outlined on new initiatives and activities being planned in the year 2016 and requested for the continued support of the members.
The incoming Secretary, Mr. D. Maheswaran, proposed the vote of thanks.